We keep hearing how irresponsible South Africans are with their money and, coming from a family history of little money and not wasting resources, it does sometimes astound me how people in this country live for today with little thought of tomorrow.

I am also often amazed at the baubles people acquire to make themselves look good – at the expense of the other more important things.

Out walking the dogs the other day, I looked at a tumble-down house with an overgrown, abandoned garden and I wondered about the self-respect of people who were prepared to show that side of themselves to the world. Granted, I thought, it is tough out there these days and maybe they were struggling. In the driveway, however, was a brand new, blinged-up Ford Ranger double cab 4×4 bakkie, worth R600 000, or at least twice what I paid for my Subaru Forester.

That person would rather show off in his (could only be a man) bakkie than worry about letting the world know he’s a slob (and trust me, it doesn’t take much just to cut the grass in a property ).

The reason for that rant – and I could go on and on with personal tales of people I have met who have ended up in financial penury through silly decisions – was the new Old Mutual TV ad, which makes a couple of points about saving for a rainy day.

First, it says, don’t delay. Late becomes never. Living for today without thought for tomorrow will kill any hopes you have of living in comfort in your declining years.

The second point is that you should go to people who have done it before, and continue to do these things. People like Old Mutual, who have been around for ever, it seems. 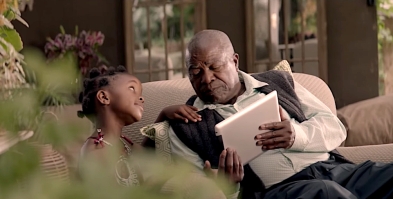 The ad, wonderfully put together by Egg Films’ director Dani Hynes, is shown through the eyes of ordinary people, from timid little ballerinas to young lads washing cars, to a couple starting out on the first scary steps to a life together.

I like the fact that it is real people and the situations are also real.

The ad has a solid reliable feel, with just the right combination of emotion and good, sage advice, which is exactly what you want in a financial institution looking after your money.

So Orchids to Old Mutual and to Egg and to FCB Joburg, the agency which crafted the concept. Not surprised – all of you have got Orchids before…

We are repeatedly told that the Internet is not only going to revolutionise the way we communicate, but also the way we do business.

But, using the web to communicate to your existing customers or enticing new ones in to spend money with your business is useless if you don’t bother responding to their digital contact.

Three examples this week – from the very top to the small – of companies who just don’t bother answering their emails.

First up, believe it or not, is First National Bank, the institution which holds itself out as the epitome of tech-savvy electronic banking.

I have an account with them and noticed what I thought was a discrepancy in the balance – I thought the figure of money available differed from the total reflected in the transaction list.

I sent a query through to FNB via the website.

I do realise that the bank is an enormous organisation, but as I write this, almost five days later, I have not had an acknowledgement, never mind a response. I think I have figured it out, because things now look OK – but that’s not the point, is it? If a customer is concerned, then why don’t you get back to him or her? Not carrying out your marketing promises will get you an Onion.

Second up was Telkom: for the second time in as many months, I sent them a query about the ISP service I have been getting from them (whenever I reply to an email from my Telkomsa.net account, the recipient never gets it – which, you’ll agree, is quite worrying). Both times I sent the queries I got an automatic electronic acknowledgement…and nothing else.

Here’s the rub, though, Telkom: you keep pestering me about taking fibre…what do you think I am going to say? Another Onion for you.

We recently bought a generator (we are some of the victims of the endlessly unreliable Roosevelt Park sub-station, which is going to take up to three years to fix) – and needed to get it wired into the main house circuits.

My wife saw an outfit called Electro-Surgeon, so she Googled them, found their website and left a message.

So we did it the old-fashioned way: a personal recommendation by my sister-in-law of electrician Joe, from Triomf Electrical. Not only did he pitch up as promised, he did some other electrical work around the house for a reasonable fee and then quoted us about half what the generator suppliers estimated it would cost to do the wiring. Then he came along the next day – at the time he promised – and not only got the wiring done (at that good price, with a compliance certificate) but fixed up the gate intercom, too.

Sorry for you, Electro-Surgeon. You might have made some money out of us. But, now that we’ve got Joe, I don’t think you’ll hear from us again.

BLOB: If anyone wants Joe’s number, or want to share similar shoot-yourself-in-the-foot marketing horror stories, drop me a line on orchidsandonions4@gmail.com