If you want to impress someone, or at least have a good chance they’ll remember you or your product, then a piece of advice often offered is “Go big, or go home…”

That’s what Nedbank Corporate and Investment Banking (CIB) has done with its latest TV commercial which took nine days to shoot, I’m told, and had locations in nine cities in two countries.

And that is going pretty big … but it fits in with the image of the bank.

Do you want someone dealing with your corporate or investment matters who thinks small? Or someone who does not see the global picture?

The ad, conceptualised by Joe Public and brought to life by director Kim Geldenhuys of 0307 Films, is intended to showcase the broad spectrum of activities in which Nedbank CIB is involved: from renewable energy solutions to infrastructure, agriculture and telecommunications.

It takes a uniform “bird’s-eye view” of life, courtesy of a series of camera-carrying drones, helicopters and cranes to give the “on high” perspective.

That perspective, of life as we seldom see it, is something which is becoming more and more common as drones start proliferating everywhere.

For the moment, the images produced are still fresh and, as the ad shows us, they do allow us to see life differently.

That, in turn, is Nedbank’s pay-off line – of seeing money differently – and is part of a broader campaign that has brought a breath of fresh air to the local ad scene, even if I have not always appreciated some aspects of it. 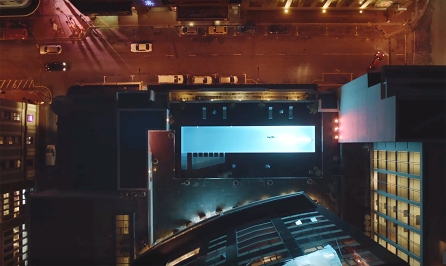 It works very well because it dovetails so sweetly with the overall marketing pitch. And when that happens, you can only get an Orchid from me.

Well done to Nedbank CIB, Joe Public and to 0307 Films. Finally, as a Nedbank customer myself, it does make me feel happy with my choice …

The sad reality, for all of us in businesses which rely on advertising for survival, is that “GooBook” – that catchy phrase hiding the potential danger of the Google and Facebook monoliths – is gobbling up a lot of new advertising.

That is especially true of the digital space, where as much as 95% (by some estimates) of new advertising in the past year has gone to the two American giants.

And that should worry you if you are concerned with privacy, diversity and freedom of both ordinary and commercial speech.

One of the ways these two giants have managed to corner the digital advertising markets is in their slick, sophisticated computer programmes and algorithms.

These offer, allegedly, the advertising buyer the possibility of directly targeting consumers because GooBook snoops on those consumers. (There is nothing you can say or complain about, by the way. If you read the terms of conditions of either of them, you will see you signed your life away.)

In theory, the programmes should help both advertisers and customers. If “the system” knows what I am looking for – through its surveillance of my online browsing history – then it can offer me marketing which I might like and which would be effective for those paying to intrude into my space. In theory …

In practice, of course, it can be somewhat different. This week, my brother-in-law was looking for a last-minute air ticket from Johannesburg to Dublin.

He had tried a number of websites but, as is common with most, his activity was tracked and as he returned each time after browsing, he found the prices were going up.

Trying from a different computer will often get around that, so he asked me if I would have a go.

I didn’t find anything which saved him a huge amount of money and I let him know.

However, Big Digital Brother had been watching my activity and, from then on whenever I went back on to the internet (I use Chrome, a Google product, as a browser) I kept getting popup ads from Travelstart offering me flights from Johannesburg to Dublin.

I opened a few of them and each time they were for flights outgoing on October 19, returning on November 9.

Nowhere, of course, had I ever entered those dates. Worse was to come, though. I thought I would open up the window and then have a quick look at prices for my correct dates. Problem!

There was no way to change that page to amend dates. So, what on earth is the point, from a marketing perspective, of enticing a customer so far into your e-commerce system only to spit them out? I was so miffed that, had I been looking for real, I would have gone elsewhere.

I cannot abide anything that wastes my time. So, for bad digital marketing, Travelstart, you get an Onion from me. Which takes effect immediately, and not on October 19…