I remember looking, in some amazement, at the results pinned on the school notice board: I had got a distinction for Physical Science. Next to the board was our lugubrious, pipe-smoking, Mr Bean-like Science teacher, “Rab” Wright.

“Please tell me, Seery, that you do not want to carry on with Physics or Chemistry?”

The answer was easy: no. I much preferred English and History to the hard subjects of maths and science.

“Rab” sighed with relief and walked away, glad that one of the clowns from the back row would not be in his class the next year.

But I’ve always quite liked science, even if I didn’t pursue it like my schoolmate Martin, who now works for the Centers for Disease Control in Atlanta. (He almost didn’t make it after I left a “gas chamber” slightly open and chlorine gas came pouring out…but that’s another story.) I’ve never disparaged nerds and I recognise the importance of science and maths to the future of any country…oh, and I married a maths teacher.

So, it was interesting to see again the TV ad done for the “Mzansi for Science”, a government project to encourage youngsters to see the beauty and potential in science. 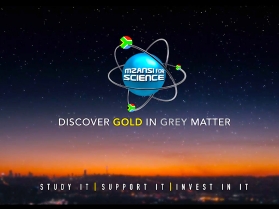 It came out a while ago, but was flighting again last week. This was, of course, coincidentally when US President Donald Trump was congratulating Pretoria-born Elon Musk for the launch of his latest rocket and proclaiming the event a triumph for American science…only to have Twitter explode with reminders that Musk actually comes from a “shithole country…”

In the ad, we see real scientists, talking about their work . It’s inspirational and made more so by the fact that these are real South Africans doing world class work.

So an Orchid for Mzansi for Science. Let’s hope you inspire many young minds.

A second Orchid this week goes to a brilliant marketing campaign being done for cell networks MTN and Cell C.

And that award goes to Vodacom, whose current customer service is worth half a dozen expensive MTN and Cell C ads in terms of attracting customers to those brands.

This time, Vodacom’s abuse of the cheapest form of marketing – customer service – is not related to its dodgy data usage recording systems, which, funnily enough, always seem to benefit the network and not the customer.

This time, it’s the high-handed away the company has unilaterally decided to communicate with customers.

I used to get my bills by post. It worked right from about 1997, when I became their customer. Then, about a year ago, they decided to do away with post. Possibly they mumbled some excuse about saving the planet through using less paper (which excuse, by the way, is absolute rubbish…but that’s a rave for another day).

I duly gave them my email address and the bills came electronically.. . for a while. Then they stopped arriving.

Then my credit expired and the debit order system didn’t work. Rather than update the card (the fewer people who have my details, the better, I think), I began paying after a receiving regular SMS reminders.

This month, Vodacom decided to – without notifying anyone, apparently – that an SMS message will no longer be sent. Now it will be a “voice note”.

Given that this sort of intrusive marketing on cellphones is becoming more prevalent – when you answer a call from a normal number and start getting played a pre-recorded message, and feel scammed – I answered the first call and terminated it immediately I heard some tinny music.

Every time I saw that number again – and Vodacom must have tried more than a dozen times after the first call – I didn’t answer.

Then I got caught out and listened past the music to find a message that I needed to pay my account.

When I queried the method with the Vodacom call centre (after hanging on for at least five minutes), I was told that the decision had been made to use voice notes in future. I was also told there was no record of my having given them my email address (tech innovation, anyone?)

What really interests me is why the company would do away with an effective and simple system of SMSes in favour of a voice-note, which is demonstrably less effective in getting through to a client but can actively damage your brand because it is annoying and unsolicited.

Maybe someone in Vodacom has a cousin who has a production company who has a voice artists and some musicians in need of employment?

Whatever the reason, I am seriously looking at MTN and Cell C…and that’s quite a statement given that it is a serious business to end a relationship going back 20 years.

So, Vodacom, for doing MTN’s and Cell C’s marketing so well, you get an Orchid from me…