I’ve always had a soft spot for Nissan: I learned to drive in a Datsun (that was originally the main brand and corporate name for Nissan) and I own a rare Datsun sportscar. But other than those cars, I’ve never felt that attracted to Nissan’s modern day products, interesting and quality cars though they are.

The company definitely has its finger on the pulse of young urban dwellers – its Micra, Juke and Qashqai models are different from their competitors and have a huge component of funky in their DNA.

Even though I am not an urban youngster or a “millennial”, I think Nissan is on target with its marketing of all those vehicles.

In particular, the Qashqai – no I am not sure how to pronounce it – has been one of the global company’s big successes. It is said to be the biggest-selling “urban crossover” in Europe and is doing well in South Africa, despite the fact it is competing in a difficult market and in a segment with plenty of players.

Clearly, though, Nissan wants to keep the urban chic aspect of the Qashqai going and that’s exactly what it has gone for – in conjunction with ad agency TBWA Hunt Lascaris.
The latest TV ad features the punchline “Cityproof” and shows how you can go a bit wild even in the middle of “civilisation”.

We see a bunch of daredevil “longboarders…young, funky men and women who whizz down hills on their roller boards at insane speeds, performing crazy stunts.

I understand the ad took its inspiration from a crew of longboarders from Cape Town, Gravity Dogz, headed by Decio Lourenco. They were used in the ad to weave in and out as the Qashqai heads downhill, also accentuating the “Intelligent safety” features on the car, including blind spot warning, cameras and emergency braking. 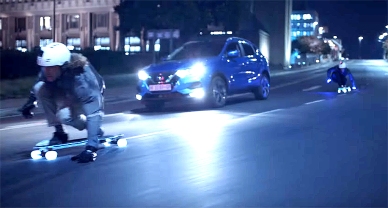 It’s the kind of video vignette which attracts attention, as does the whole genre of adrenalin adventures…so it hits the target market spot on. At the same time, it does more than just push the brand, it details the virtues of the product. That is not always easy to achieve in one ad.

Orchids to Nissan, TBWA Hunt Lascaris and Egg Prodcutions, as well as the crew from Gravity Dogz. Big Ups, dudes.

No big ups, unfortunately, for the latest ad for Castle Lager and its new 1-litre bottle.The copywriters strained every possible clever cell in coming up with the one-syllable expressions of – what is it? Howzit, I suppose. Or even… wonder? – in rolling out bru (brew,geddit?); bro, bruski etc etc.

Four people gathered at their door to greet the long lost buddy who has returned with his enormous 1-litre bottle of beer and they express their glee when he arrives. He only has one bottle, though.

Which means that the total of five people only get 200ml each…and you see them with their pathetically small glasses.

The ad is a silly attempt at being clever in the first place and, even though it is an ad, badly fails at the first test of logic.So it gets an extra large Onion (to be split between the copywriters).