Beer is, for the most part, a product for men. They are, by far, the majority of its consumers and, therefore, the advertising is generally directed at them. And over the years, beer advertising as a genre has generated some good ads and some shockers.

The ads which fail are those which lose sight of the reality that men are, in fact, just big boys…and they get amused by little things. And they are amused by the fact of being boys – and doing the things only boys can do in that little, exclusive club of theirs.

Interestingly, when it comes to sexist attitudes, race doesn’t come into it…
What boys don’t really like is when their beer brand tries to preach to them or, even worse, when it tries to pretend it is something it is not, or to paint a false reality. That, in a beer cap, was what made the Carling Black Label ads of the 80s and 90s so cringe-worthy. The white bosses and black labourers simply did not get together – after a hard day building dams, rescuing damsels in distress, or even getting kittens out of high trees – and sink a Carling round a braai fire.

That was the sort of ideal society the Soviet propagandists used to portray – while everybody on the ground knew the harsh reality.

Windhoek beer (in this case Lager, but also its other, lesser-known brands) has always been my favourite. I lived in Namibia for almost five years and it was the drink of choice for the boys (women would only occasionally have a Windhoek Light, and normally only if it was a lunchtime braai). When I came to South Africa, I found it very difficult to find Windhoek products. I couldn’t stand any of the SA Breweries equivalents, so I switched to wine. And that’s where I’ve stayed…except for the occasional hot day or when we have beer-drinking guests. And out comes the Windhoek.

So I am still fiercely loyal to the brand, as are many men…and it hurt me to give Windhoek a marketing Onion some months ago for their silly Carling Black Label copycat ad supposedly telling the story of the Windhoek Brewery and how everybody – black and white – came together in a crisis in the 1930s. Rubbish…

I wondered then why they hadn’t continued their earlier ad idea of a slightly mocking portrayal of the silliness of men (and we can laugh at ourselves).
I am glad they’ve got that groove back, though, with their latest TV ad, because it speaks to all of the good and bad things about men.

We see a couple – young and, we suppose, in love – as they watch a magical sunset over the sea. The dolphins perform for them, forming a romantic heart, as do the birds flying past. Even the clouds form a cute heart.
She turns to him and asks: “Can it get any more perfect?” He’s about to agree, when his eye falls on a neighbour, sitting with a woman, both with bottles of Windhoek Lager in hand. 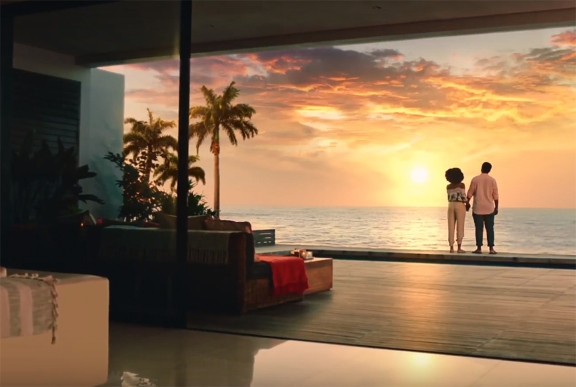 He doesn’t have one in his hand and his envy is as green as the beer bottle. A tear comes to his eyes. She thinks it’s because he’s a SNAG (Sensitive New Age Guy) and she wipes it gently away. But we know the truth.

Parting a man from his beer will make him cry. And that’s what reminds us why we love the brand, not the silly fake kum- ba-yah moments.

Great ad from a great beer, so it gets an Orchid from me.
So, this one falls in the “pull the other leg please” category. First National Bank has, according to the SMS it sent me last week, changed the way its ATMs operate. Now, if you make a withdrawal, you card will be spat out of the machine before the cash.
So, said the SMS, “Do not walk away. PLEASE wait for your cash.”

What intrigued me, though, was the first line of the SMS: “You spoke and we listened.” In other words, the implication is that consumers wanted this change. No-one asked me. I’d be interested to hear if anyone else actually asked the bank.

I don’t think so. I think they just decided to change the system, because their techies said so…or to use the same standards as others.