When I grew up, there was never much money in the house. And, with Irish ancestry, I have a fear of poverty in my DNA, which can probably be traced back to the Irish Famine. So, I am careful with money.

I was, for much of the time my own kids were growing up, also a bit of a disciplinarian – overly so in many instances, I now realise – and it would also irritate me to see their mother “spoil” them on the odd occasion. That, I believed, would turn them into soft spongers and lay-abouts.

I’ve met, and worked with, a few of them in my time: the ones with loaded parents, private school educations and the proverbial silver spoon upbringing…who did not believe they had to work for anything.

Fortunately – and probably thanks to their own efforts, rather than my “spare the rod and spoil the child” belief – both my son and daughter have turned out well. And, interestingly, they are also sensible when it comes to money.

So, I must say, I could relate to the new TV ad for investment specialists Allan Gray.
The message of the ad is the same, basically, as that of every other long-term financial institution: patience and discipline will see your money gradually, but inexorably, grow.
The challenge for Allan Gray and its ad agency, King James II, was to convey that common message in a way which stands out.
The result is a very South African, and very touching, ad.

We see a black family over the course of 50 years. A young boy discovers early on that his disciplinarian father always wants a “cut” of any money he earns – whether it’s carting bricks or selling vetkoek. As the boy grows up, heads to the big city and gets a job, he continues to send money back home – in cash or in postal orders (anyone remember those?).

It always seems as though he is giving, giving, giving to the old man. Finally, when his father dies and the formalities are being concluded, he discovers that his father has been keeping a detailed ledger over all the years – saving the money, which now goes back to his son. The message is, appropriately, “true rewards take time”. 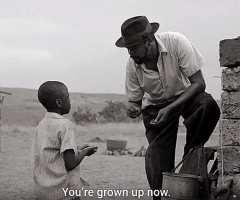 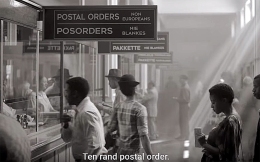 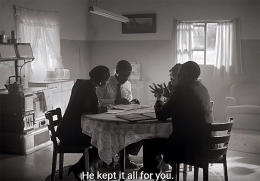 The ad is beautifully shot, in black and white, by director Pete Pohorsky of Plank Productions and the attention to detail in the clothing, props and locations is impressive, creating a memorable period piece.

But the ad goes further than that – as all outstanding advertising does – by making a social contribution, even though that was not the intent. From my perspective, you cannot watch this ad – especially as a white person – and deny that black people in this country have had a huge struggle. You are reminded of this in the scene where the dutiful son collects his postal order from the window marked “Net Nie-Blankes” (Non-Whites Only).

At the same time, you are reminded – whoever you are – of the dignity there is in discipline and working hard… values which are sometimes hard to find in today’s society.

Yet again, the advertising of Allan Gray makes you stop and pause for thought, in so many ways. So Orchids to Allan Gray, King James II and Plank Productions. It’s a time reminder that our ad industry hasn’t lost the ability to tell spell-binding tales…

If I had a buck for every time some genius has tried to tell me the “future of advertising is mobile”, I could have bought myself a tropical island. The reality is that a lot of advertising which comes through to your phone is borderline, and even actually, fraudulent. If you have to force something down people’s throats it’s an acknowledgment how ineffective mobile is as an advertising medium.

So, everybody reading this will have encountered the spam SMS messages – because we all know the biggest dodgy industry in this country is data base marketing – and the “robocall” phenomenon. This is where your phone will ring and, hardly have you said “good morning” than an automated, recorded message starts playing. That’s intrusive marketing at its worst.

The one which disturbed my day was from an outfit called “Doctor, Doctor”, offering some sort of assistance for R5 a day. You press “1” and you’re automatically signed up. You can press “9” to “opt out” – but you just know that won’t work because they system will flag you as a real human being and you will be on a call list for eternity.

This number has come up on a few number-tracking sites and the user comments are uniformly angry, and negative. I understand that, because having this is like having burglars bust into your house. I cannot understand why so many big brands – FNB and Edgars have been cited by complainants as using this marketing system and number – get involved.

This actually harms your brand and makes people angry. So Onion to 010 590 8977 – please pass this number on to everyone you know – and to Doctor, Doctor for using this dodgy service.