The Western Cape government has run some interesting marketing campaigns over the past few years, aimed at changing social behaviour. They’ve tackled everything from talking and texting to drunken driving … and all the executions have been difficult to ignore, either because they have shocked or because they have got you thinking.

The latest campaign is no different.

It’s aimed a tackling the plague of bullying in schools, which is not just a Western Cape phenomenon but is something affecting the whole country.

And, it’s technology which is proving to be the vector by which bullying spreads.

Tackling both the bullying and technology as part-culprit was the reason behind the 5 Questions to End Bullying initiative.

It was put together by digital specialist agency Hellocomputer and FCB Cape Town, which has done some of the other gut-wrenching work for the Western Cape government. I am told child psychologists were brought in to ensure that the ideas were conveyed appropriately.

Initially, students from a number of schools around the province were brought to a central place and then, one by one, were shown a video of a fake bullying incident in a school yard.

After looking at the video, the learners were taken through a series of five questions which resulted in them realising that the person they would have initially identified as the bully was not the only one: everyone who watched what happened and videoed it on their phones was just as guilty.

The interviews with the pupils were unscripted and it is touching to see the penny dropping for them as they realise that they can be accomplices to bullying.

The video was part of what the agencies called a “mobile toolkit”. To launch the concept, influential students from around the province were recruited to post the video and fake incident to their social media accounts.

People who looked at those posts were encouraged to find out more about the incident by going to a mobile site set up to look like a Buzzfeed account.

There were various questions there which were aimed at getting them to answer honestly, and, in doing so, question their own behaviour, especially by promoting bullying by spreading it virally. 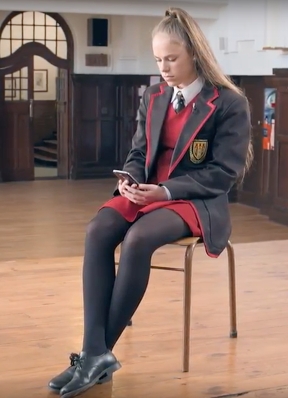 The message which ties it all together, though, is classic marketing copywriting: “Raise your voice, not your phone”.

It’s a great idea, a campaign which is important for society as a whole. But I also like the way digital and social media have been used to reach a specific target market.

Orchids, yet again, to the Western Cape government and to Hellocomputer and FCB Cape Town.

The most heart-warming aspect, though, is that watching the video of the interviews gives one renewed hope in our young people…

Renewal, it must be said, is the second cousin of repetition, the watchword, it seems, of DsTV’s  house ads and its programming these days.

We spend a fair bit of time on the Comedy Channel and the ads there are not only repeated too often, but the ad breaks go on too long.

Also, although I wouldn’t class myself as a prude, sometimes I do find the channel pushes the boundaries in its content. But in this Women’s Month, I think Comedy Channel has not merely overstepped the bounds of good taste, it has leapfrogged over them.

I don’t know which clever thought it would be cute or funny to underline women’s liberation and independence by focusing on how they can “burp, snort and fart” just as well (or should that be badly?) as any man.

I don’t want to know that DsTV…especially around supper time.

Save your scatological (definition per Collins dictionary: “characterised by obscenity or preoccupation with obscenity, especially in the form of reference to excrement”) humour for late at night, if at all.

Here’s a smelly Onion for you….