KEVIN RITCHIE
SO WHERE do you stand on this whole fossil versus electric debate?
If you’d asked me a couple of months ago, the answer would have been unequivocal: Petrol, global warming or not. I think it’s a combination of factors: I’m not a new tech adapter and the nature of innovation is that a lot of it is clunky, often counter-intuitive.
The first omens weren’t good. The car looked awkward for a start, unlike say BMW’s efforts which make the electric option aspirational (Eskom load shedding and the lack of power points notwithstanding.) The inside colour of the cabin, stark utilitarian white was a bit clinical rather than inviting. But pulling out of the parking bay, gliding silently, was – to mangle the advertising payoff line – priceless.
There’s a joystick type gear selector and there are different modes for driving: Normal, Eco and Power, which change the colour of the screen so you’re in no doubt what option you’re in when you’ve selected it.
For me the true fun, blame my Scots’ heritage was to see how little fuel I could use. Joburg is seriously hilly so it’s not a case of pushing the downhills to build up enough speed to freewheel as far as you can up the hills, instead it’s about using the speed that you are maintaining to keep topping up the battery pack without having to use the 1,8l petrol engine.
If you need to, irrespective of the mode you’re in, you can just floor it and the conventional engine kicks in immediately and you power out of whatever situation you need to get out of, with 72kW for a top end of 180km/h or 100km/h in 10.6 seconds if you need it. What was fascinating just how I started disliking myself every time I got into that space, so I started driving more carefully, revelling in just how low I could keep the consumption down to.
Toyota claims in town consumption of 3,7l/ 100kms in combined consumption (petrol and batteries) and I have to admit I was getting those numbers when I concentrated. Even when I was a bit heavy footed, the fuel use was ridiculously low – and I’m used to low numbers because I drive small cars.
The Prius isn’t going to win prizes for aesthetics, I still think it’s pig ugly, only a geek could call it attractive, but it comes generously equipped with the mod cons upper end buyers expect these days, like the 7” touch screen entertainment/ communication console smack bang in the centre of the dashboard. There are also two 4.2” screens for the driver pushing out all the tech details from speed to fuel/ battery consumption, trip meter, drive mode, general performance and driving tips. A rear view camera (for reversing) and a heads up display on the windscreen are standard as are the heated seats and the seven airbags. There’s also a generous dollop of the safety acronyms beloved of petrol heads; TRC, BA, VSC, EBD and the now old hat ABS.
The car is comfy inside and spacious, think Toyota Verso in terms of head room and arm space. There’s a generous boot too.
It’s got everything you could possibly want in truth, plus it’s cheap on petrol but… It’s not cheap, starting at R455 300, it’s seriously not sexy. In fact, even if the greenies are doing their best to make it cool, it still comes off as worthy and, dare I say it, a bit pointless.
You’re still using fuel, albeit less, but what happens when the tech gets replaced and you trade in?
You probably think it’s a bizarre question, but in the last 15 years in which I – and my family – have become increasingly enmeshed in tech, I have become singularly horrified by the number of obsolete gadgets that we have amassed; from cell phones that have become door stops, heavy old lap tops, even tablets that were right on the cusp of the tech wave when we had to get them. I can’t get rid of them. Even if I did, they’d take thousands of years to biodegrade, by which time I’d be nothing but an organic memory and my descendants would have put exponentially even more gadgets.
It’s perhaps counter-intuitive, but newspapers which the amaKhlevas and the hipsters are forever trying to sound the death knell on are biodegradable. They are disposable when you’re finished with them (plus you can light braais, clean up dog mess, swat flies etc) and they get recycled. Over and above that thousands of hectares of commercial forests are planted to create paper for the presses, but in the process create green lungs to rid the atmosphere of harmless toxins. 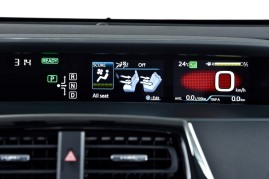 If I am starting to sound like a climate change sceptic, forgive me because I’m not, far from it. It’s just that I don’t buy into the hype of hybrid power – it’s a little like being half pregnant, and I’m seriously worried about the untold environmental effects of acres of superannuated batteries lying in dumps leaking acid.
But that’s just me.

Electric cars, I hope, will be an alternative to fossil fuel, although having Eskom as the main supplier fills me with dread, I’m just not convinced it’s time to write off the old internal combustion engine just yet, not when you see the strides that the boffins are making.
The Prius works. It’s just not the best advert for the brave new world, unless it’s a world of cardigans, pens in the outside pocket and thick glasses.